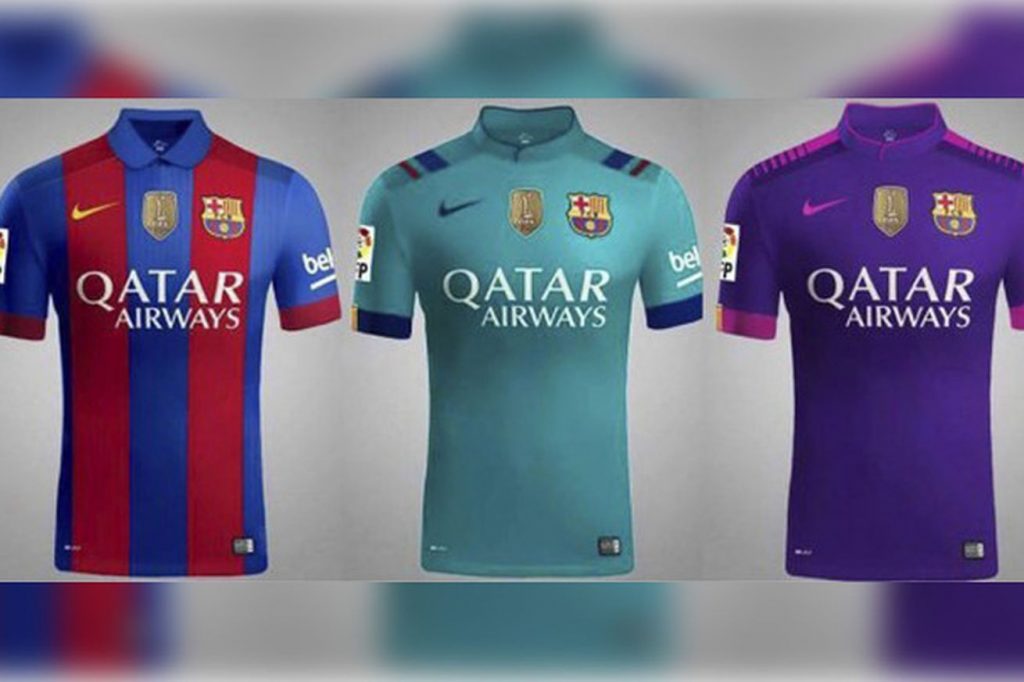 The club will begin manufacturing next season’s kits without any logo after failing to tie down a new contract.

No sponsor yet for 2016 FC Barcelona shirts

Even though some sources states that Barcelona tied down a deal with Qatar Airways as the shirt sponsor for the 2016 season, it seems that the club has begun manufacturing next season’s club shirts without a sponsor after all. The original shirts you can see in the image at the top of this article were the ones with the Qatar Airways logo on them. However, Barcelona’s vice-president of marketing, Manel Arroyo, announced in March that the club had spoken with Nike and that “the first shirts of the season will be without a sponsor”.

And according to Sport English, the club has yet to tie down a new deal and are now set to begin manufacturing the shirt without a sponsor. It would be the first time in 10 years that Barcelona has not had a shirt sponsor, as the club only began featuring sponsors on its shirts in the 2005-06 season. This could make these new shirts true collectors items.

With previous sponsors including Unicef and Qatar Foundation, the club was most recently sponsored by Qatar Airways in a €60 million deal, but the club did not respect the contract after the board’s new elections which resulted in sponsorship not being renewed for next season. While the marketing team has been working hard to put pen to paper on a new contract, the time has come for next season’s shirts to be manufactured and Barcelona has decided to go ahead without a sponsor for the time being.

The club will now look to lock in a sponsor before the next season begins, but it appears the club are relaxed in tying down a new deal and are not ruling out beginning the new season without a sponsor.
While the club will be disappointed that they’ve been unable to sign a new shirt contract, which plays an integral role in the club’s funding, it’s not all bad news for fans who are generally more than happy to wear a shirt that doesn’t feature a marketing logo.

In fact, Nike apparently believes the shirt will be more successful than usual due to the fact a shirt without a sponsor holds a higher value and could be considered a collectors item. While it’s unknown how many of the unsponsored shirts will be manufactured, it is 100 percent certain that the first batch of shirts produced will not feature a logo.

Barcelona, who currently sit even on points at the top of La Liga with Atletico Madrid, will head to Real Betis this Saturday in an attempt to stretch their lead at the top. With just three games to go, the club currently lead through goal difference and will be sure to take every game seriously as they attempt to wrap up the title.

What are you looking for?